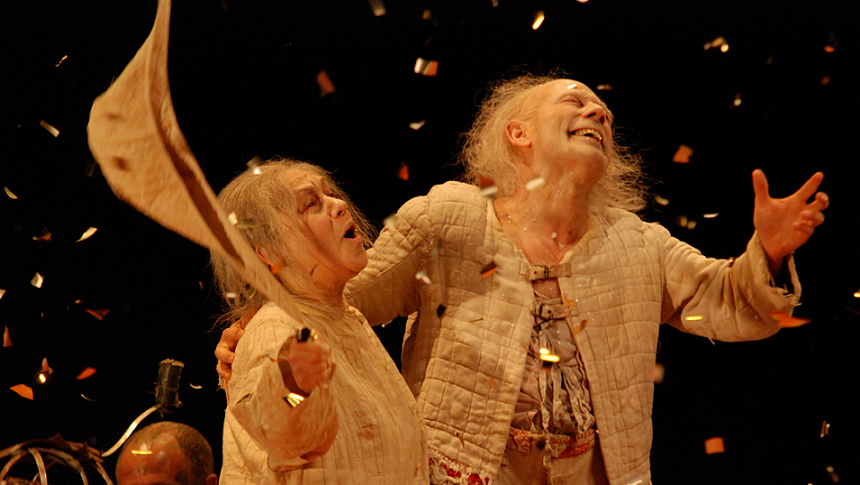 "Requiem", Written and Directed by Hanoch Levin, Returns to the Stage for the First Time in Two Years

After a long hiatus due to Covid, Requiem, written and directed by Hanoch Levin has returned to the stage. On the three evenings that the play was staged last week, there wasn’t an empty seat in the entire Cameri 1 − 900-seat theater. Even now, 22 years after the play first premiered in the Tel Aviv theater, this very special production, which renders Levin’s world with magic and precision, continues to captivate audiences and has become more relevant than ever.

Shimon Be’eri, a theater aficionado who has seen Requiem dozens of times, didn’t miss this chance to see the play again this week. In an interview with the N12 evening news, he said that he’s never witnessed such an enthusiastic encore. “A long-standing ovation from 900 people is not something I’ve experience often,” he told reporters.

Rami Baruch, who plays the role of the old man in Requiem, wrote on his Facebook page: “I think that it’s these magical moments on the stage that carry you on wings to the heavens in the theatre hall are the reason I dreamt as a child of becoming an actor. Eight years ago my wife and I were handed the torch from actors Yosef Carmon and Zaharia Harifai, and since then we do our best to fill their shoes on the incredible journey from Schchochi to Pjojy and back.”

In the coming months, Requiem will return to the Cameri theatre for another round of performances. Details about the shows to be announced.

Read more about the production here.